Home News Give Back A Partnership and a Pledge: Toyota Material Handling Helps American Red Cross Carry the Load 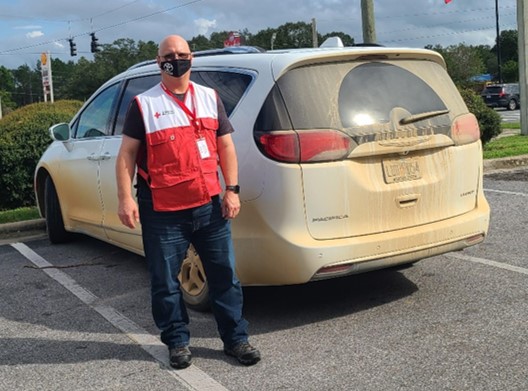 COLUMBUS, Ind. (December 15, 2020) — In early September, Dean Stewart got a weather warning on his phone: Category 2 hurricane to make Florida landfall in 72 hours. Despite seeing clear skies from his Columbus office – and 1,800 miles separating Toyota Material Handling’s North American headquarters from Florida – Stewart went on alert, preparing to respond as if the natural disaster was heading for his own backyard.

On September 11, Hurricane Sally made landfall with winds gusting up to 103 mph, paving a path of destruction across the Florida panhandle that left thousands without power, water or shelter. Just a few days later, as a result of a unique partnership between Toyota Material Handling and the American Red Cross, Stewart embarked on a two-week deployment to Florida, conducting major damage assessments for the Red Cross. Stewart – a TMH strategic account executive, and U.S. Army veteran – was one of a few Red Cross volunteers who were able to deploy because of the demands and restrictions created by the COVID-19 pandemic.

Toyota Material Handling supported Stewart’s two-week deployment, and a growing group of Toyota associates are participating in the company’s alliance with the Red Cross, a partnership formally established in 2018.

TMH President & CEO Jeff Rufener championed the initiative because of his passion for the mission of the Red Cross. Instead of just making monetary donations, though, Rufener wanted to set an example for the company by dedicating time to ensure he was intimately engaged in – and committed to – Toyota’s partnership with the Red Cross.

Rufener’s service as a board member for the Red Cross’ Southeast Chapter of Indiana marked the beginning of a much broader relationship, along with a pledge for a coordinated, national disaster response solution from the powerful North American Toyota Forklift network.

“Toyota’s founding principle, the reason we exist, is to contribute to society. That’s why we chose to partner with the Red Cross, because its mission aligns so well with ours,” Rufener said. “We are a business, so we obviously have to generate a profit to sustain ourselves, but we can never lose sight of our core purpose. Our forklift interpretation of that core purpose is ‘Helping People Carry the Load’.”

Logistics are a major challenge in any disaster relief effort because, once acquired, food, water, clothing and temporary shelter must be moved quickly and efficiently. Forklifts amplify and streamline recovery work because deploying of a forklift, or a fleet of them, can reduce the need for disaster response teams to manually move relief supplies. This means desperately needed supplies and materials can get to the families in need much faster and more efficiently.

“The Red Cross is extremely grateful to count Toyota Material Handling as a valued partner during times of disaster,” said Brad Kieserman, Vice President of Disaster Services and Logistics for the American Red Cross. “Toyota Material Handling, its employees and dealers are always there when we need them with equipment and support to help quickly deliver aid to people impacted by disasters big and small.”

In 2020, a year full of challenges, Toyota’s corporate partnership with the American Red Cross resonates more now than ever. Both organizations have become synonymous with innovation and continuous improvement. Toyota is supporting the Red Cross through these times of change with a recent capital investment for a new blood mobile that will be the first-ever mobile collection unit built with COVID-19 safety precautions in mind.

The largest response by Toyota dealers occurred during the fall of 2018 when Category 4 Hurricane Florence hit the nation’s East Coast in September, followed less than a month later by Category 5 Hurricane Michael, in Florida. These successive disasters caused historic levels of catastrophic damage along both the East and Gulf coasts, prompting the immediate response of multiple Toyota dealers and the dispatch of more than 50 material handling units.

Toyota support for the Red Cross partnership encompasses a wide variety of lifesaving programs and includes:

Beyond disaster relief assistance, Toyota Material Handling and its associates are engaged in a variety of programs that support the Red Cross through corporate giving and a heightened level of volunteerism. TMH offers their associates 16 hours of paid volunteer time each year, with eight hours specifically earmarked for the Red Cross. As one example, Toyota Material Handling associates supported “Sound the Alarm” events over the past two years. Home fires claim seven lives every day, but having working smoke alarms can cut the risk of death by half. Toyota associates installed 232 free smoke alarms, shared safety information with 375 families in at-risk communities, and raised funds to help families prepare for, respond to, and recover from home fires.

Looking Ahead: Charting the Course for a Growing Partnership

Toyota Material Handling is committed to providing even more support for the Red Cross in the coming years. Rufener’s vision for the partnership started with a pledge to provide any material handling equipment needed by the American Red Cross to respond to disasters  anywhere in North America, but has since grown into something much larger – and more powerful – than just equipment donation.

“Helping People Carry the Load” has become the mantra for Toyota’s partnership with the Red Cross and has provided company associates and its dealers with a shared mission and a unifying sense of purpose. It has strengthened TMH’s corporate culture, reinforced its adherence to the company’s core values and, most importantly, it has positively impacted countless lives throughout North America.

“I’m extremely fortunate to work for a company that doesn’t just say that helping others is important, but actively encourages and supports its people to be there for others in their time of greatest need,” Stewart said. “What else could you really ask for?”

The Toyota Material Handling Annual Corporate Social Responsibility Report details Toyota’s partnership with the American Red Cross, and the many other ways the company honors its mission to use its position as the No. 1 forklift and material handling brand in North America to be an exceptional corporate partner. To learn how you can support your local chapter of the Red Cross, click here.

About the American Red Cross:

The American Red Cross shelters, feeds and provides emotional support to victims of disasters; supplies about 40 percent of the nation’s blood; teaches skills that save lives; provides international humanitarian aid; and supports military members and their families. The Red Cross is a not-for-profit organization that depends on volunteers and the generosity of the American public to perform its mission. For more information, please visit redcross.org or cruzrojaamericana.org, or visit us on Twitter at @RedCross.