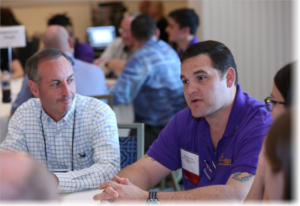 Over 600 distributor and manufacturing companies across the world representing several thousand employees utilize our resources each day to help their business stay competitive and employees stay connected. Join the MHEDA community.

MHEDA is your direct connection to the Material Handling Industry’s hottest trends, newest products, best management training workshops and represents a wealth of resources for all material handling businesses.

Our Members represent the nation’s major material handling distributors, as well as the leading manufacturers of storage and handling, lift trucks, conveyor equipment and technology.

Our vision is to be recognized among our members and peers as the premier trade association in North America.

Our mission is to enhance each member’s success through superior programming in the area of benchmarking, networking and education. 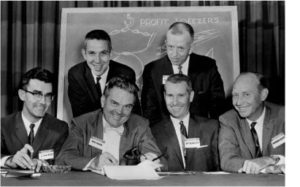 Over sixty five years ago, a small group of material handling equipment distributors recognized the need for a national organization to help distributors conduct business more professionally, offer opportunities to learn from each other, provide information relevant to business and ensure a voice for your business. Hence, the Material Handling Equipment Distributors Association was established on October 10, 1954 at the Morrison Hotel in Chicago.

Since 1954, the Association has been led by hundreds of volunteer directors, all working to make MHEDA a solid, growing national trade association with a mission to be the best resource for services and information for all material handling companies.

We are your direct connection to the Material Handling Industry’s hottest trends, newest products, best management training workshops and represent a wealth of resources for all material handling businesses.