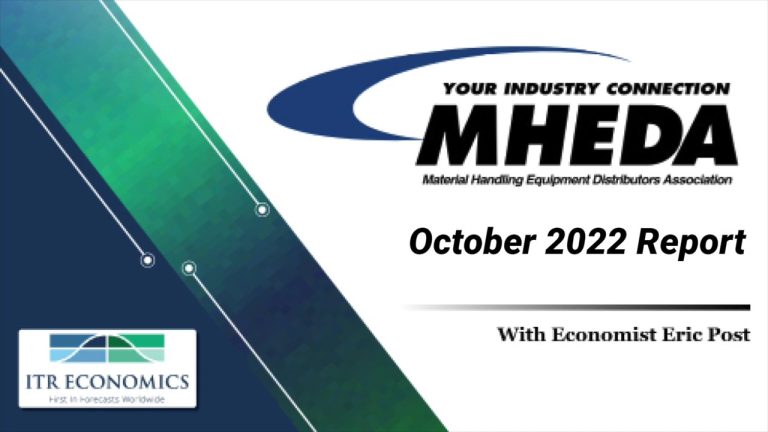 This quarterly economic report, published by ITR Economics, features data specifically for the material handling industry to assist MHEDA members plan for the year ahead. The full detailed report is available to members only. Order and download the new report as well as past archived issues (requires member login).

Hi everyone. I’m Eric post. I’m the director of research and development here at ich economics and really excited to give you a preview and overview of your Makita report for the fourth quarter here. And as we move into the fourth quarter what a year, it has been we’ve had two quarters of GDP decline real GDP decline in the first half of 2022.

And then a quarter of rise in the third quarter that just came out so very bumpy along the flatness line for GDP. We’ve had significant pullback in the stock market. We’ve had some increase in interest rates through it all though. The consumer has fared relatively. Well retail sales are doing very nicely up double digits here over a year.

Look good too. So people are not over leveraged in their life. They’re able to keep up with their debt commitments when you look at wages, excluding transfer payments. Those are at record highs. So plenty to be excited about in the economy plenty to be worried about in the economy too. When you think back to what interest rates we’re doing at the beginning of this year and where they are now, it is a big change big big change. We have mortgage rates somewhere. Round sevenish percent give or take depending on the day that you’re looking at things. So what’s going to happen in the future? Well, when we look at the economy as a whole For industrial production. We’re going to see slowing growth pretty significant pullback in growth rates next year and then a bump up in 2024. There’s one risk to that Outlook that we are keeping an Eagle Eye on and that is what the Federal Reserve does. Like. I said interest rates have gone up a lot this year about over 300 basis points. And really what matters is do we see a yield curve inversion between 10 month government bonds and stream.

Excuse me, 10 year government bonds in three month government bonds. If we see that yield curve invert, it means that it’s a more uncertain near term for the US economy and we could see a recession if we see that sustained in version. So what does that mean for the future? I think that really means two things for you. Number one is I would have my base case forecast based upon the assumption that industrial production business spending Material Handling equipment are going to slow quite considerably in the case of material handling equipment even dips slightly next year, but nothing is going to fall apart completely and that’s because we have all kinds of Tailwinds. We have all those consumer fundamentals.

I’ve mentioned they’re very nice we Have very nice corporate profit that friends over the past bit now, that’ll be weakening going forward but there’s still a lot of cash out there in businesses Pockets that they can spend they have supply chain problems to fix and that’s going to mean investments in B2B and in material and Equipment, they have processes to automate because labor is so expensive that means investments in B2B the material handling equipment. And so when you consider all that reshoring near Shoring they’re certainly are plenty of Tailwinds to the economy too. It’s just that they’re going to be coming up against all of the headwinds that certainly are making the news we can in global economic growth and interest rate increases war and Ukraine and inflationary pressures, by the way. Let’s talk a little bit about inflation. What are some bad things there? What are some good things? Well, the bad things are the inflation rate still very elevated. The good thing now is both on a supply basis and on in demand basis. We see some signs of improvement going forward.

First of all demand is going to be weakening that’s bad for the economy is at large but it’s good for inflation. It means we won’t see the same acute demand pressures that we’ve seen going forward.

Second thing is on a supply basis. The supply chain is starting to untangle and that’s going to allow some markets like Automotive in particular to really begin to ramp up. And so some manufacturers are going to start to see ability to work through their backlogs.

They still have some pretty long backlogs out there. That’ll keep us afloat. Even though we have the overall macroeconomic environment weakening. It’s also gonna allow the Federal Reserve to take their foot off the gas pedal when it comes to interest rate hikes if they so choose they may not choose though. And so I think when you plan for that world of significantly slower growth mild recession in some markets next year. You also want to have a plan B and I would put it in a glass case and be standing by with a hammer in case Federal Reserve over Titans. You can break the glass and grab your plan and be ready to go and that plan should contain if we see the Federal Reserve over tightness injury session We’re Not Gonna spend on this we’re not going to spend on that.

We’re gonna cut back on this and we’re going to do this to get ourselves even more short up and ready for a more difficult economic time. So we don’t want you to just walk into next year ignor.

Interest rate risk, by the way. When is that going to hit the economy primarily 2024 actually late 2023, excuse me could begin to feel some of those effects as well.

But when you start to see a yield curve inversion where three months interest rates or yields move above 10 year government bond interest rates. It actually takes a couple months of that sustained and then on median about 15 months before the effect really shows up in the economy. So it’s a long time between Windows interest rates change in when the effects trickle down fully to the macro economy. So primarily that’s a risk for 2024 again, maybe second half 2023 of things move quickly. So have that playing at the ready and be prepared if we come to you in a quarter or two quarters and say yeah that’s gone too far have that plan ready to grab out of the glass case?

So in terms of your report, what can you see in there? We did lower our producer prices forecast. And that’s one of the reasons we cut the material handling orders equipment.

New orders forecast just a bit. So now we’re seeing a very flat 2023 as a whole versus very mild growth in the prior forecast for 2023 as well. So a little bit softer expectations there, um in terms of a good sign though, we upgraded our Auto Outlook that supply chain Improvement is really beginning to allow that market to work through and start to produce more. So utilization rates are creeping up semiconductor availability is looking better. And so that’s very good news for that segment of the economy in terms of other markets. We’re going to see e-commerce growth rates to celebrate significantly and probably might have seen Amazon’s very tough guidance for the fourth quarter 2022 and certainly where we’re seeing.

Similar Trends, I guess you could say in the market as a whole for online. We’ll see warehouse space begin to slow in terms of construction because of the macro economy slowing because of the e-commerce slowing so that won’t be growing as quickly food production is going to continue to grow to meet and demand there and B2B and industrial production. We pretty much covered as far as software growth rates next year, you know be mindful of good the fat overtightness into recession. Yes, they absolutely good.

So that’s what’s a plan for certainly 2023 is going to be a week or year, but they’ll be some bright spots in the economy. We’ll have oil and gas looking pretty good. We’re going to have Automotive looking pretty good. Then we’ll have some markets better looking weaker. So don’t go into it with a completely glass half empty look, please there’s all kinds of headlines out there in the news, but you know if you Report that says hey, you know credit card delinquencies are really really low.

So I hope that helps. If you have any questions, please don’t hesitate to reach out. We always love questions from from our readers here and hope your business planning for next year goes great. 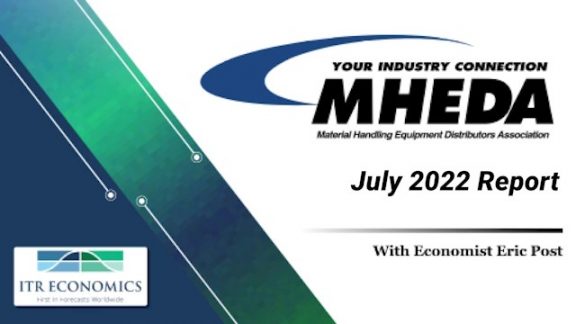 This quarterly economic report, published by ITR Economics, features data specifically for the material handling industry to assist MHEDA members plan for the year ahead. The full detailed report is available to members only. Order and download the new report as well as past archived issues (requires member login). 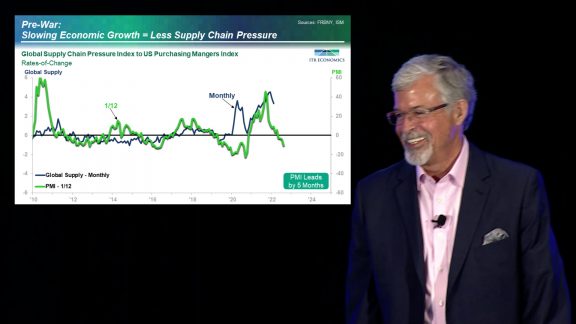 Key segments of the US and global economy are experiencing a decelerating rate of rise while others are accelerating. In this session presented at the 2022 MHEDA annual convention, Brian Beaulieu assessed the input from proven leading indicators to determine the opportunities and risks for the remainder of 2022 and for 2023 in pertinent segments […] 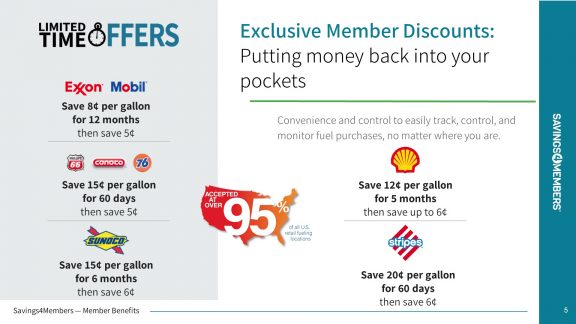 Your MHEDA membership can help you reduce the impact of rising fuel costs! MHEDA has partnered with Savings4Members to offer discounts on many business services including exlusive savings with WEX fuel cards. These cards offer the following benefits: Free to enroll (all set up and card fees waived) Accepted at over 95% of gas stations […] 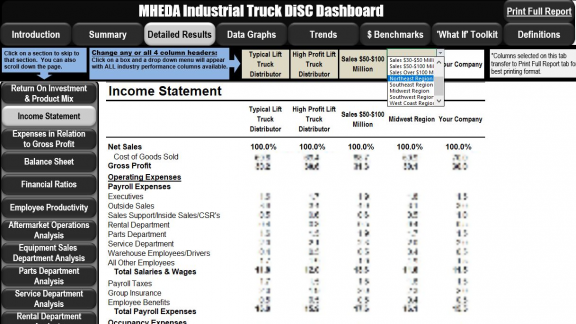 Financial Benchmarking with the DiSC Report

Access to financial benchmarking data will help you plan for the future. The MHEDA DiSC (Distributor Statistical Comparison) Report is a financial benchmarking study that reviews and compares MHEDA distributor member companies to give you customized data and insights on three important profit drivers: Growth, Gross Margin, Expenses. The report is based on financial data […]