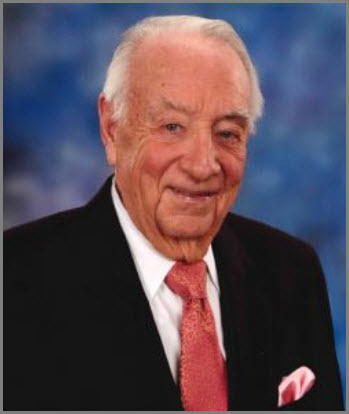 Bill Medley passed away peacefully with his family by his side at the age of 90 on Tuesday, August 11, 2020. He began his long, adventurous life on May 11, 1930 when he was born at Saint Anthony hospital to Joe and Fran Medley. His happy childhood centered around John Carroll School, which he attended from first grade through high school, graduating as class president in 1948. His favorite classmate and future wife, Jacqueline Fennessey, would graduate one year later.

Bill entered Oklahoma University where he majored in business management and became a proud member and officer of Theta Kappa Phi fraternity. He graduated in June of 1952.

On June 7, 1952 he and Jackie were married and began their blessed and beautiful 68-year marital journey. They happily welcomed the births of their four children, Mark, Melinda, Mary and Michelle.

Even though Bill had a job offer from a Tulsa oil firm, he decided during his honeymoon to join his mother and dad in their 2-person family business, Joe Medley Scale Company, that they founded in 1941. Bill expanded the company by adding Yale lift trucks and material handling equipment. The business grew to have 100 employees and six locations in Oklahoma, New Mexico, and West Texas. After his retirement in 1995, his son Mark expanded the company extensively. Currently the business is thriving with Bill‘s daughter, Michelle, grandson Ryan, and granddaughter Marysa, continuing four generations of a successful family business.

His vast church and community service was impressive. He was a member of Uptown Kiwanis, President of the Oklahoma City Food Bank, Tip Breakfast Club, Men’s Dinner Club, Bishop Financial Advisory Board, and President of the Serra Club which all added to the quality of life in Oklahoma City. He was currently a member of Christ the King Catholic Church and was proud to be a founding member of the Community of John the 23rd in the 1960s. This was an experimental Roman Catholic Parish that served the community for several years.

Bill’s insatiable appetite for learning and travel was matched only by his enormous passion. He was happiest when he was surrounded by family and friends who could share in his enthusiasm. His wit and sense of humor were infectious, and he and Jackie loved entertaining in their Oklahoma City home; at Lake Tenkiller; in Vail; and Palm Springs. He was right-handed but played a great golf game left-handed at his home course, Quail Creek Golf and Country Club. Bill was an accomplished snow skier and served as president of the Oklahoma City Ski Club. He loved OU football and enjoyed the Oklahoma City Thunder. Bill was an avid collector of hats and nutcrackers. At last count he had over 130 nutcrackers.

Jackie and Bill traveled extensively throughout the US visiting all of the presidential libraries. They vacationed on 6 continents and accumulated over 4 million air miles on American Airlines. Along the way, you could observe Bill making time to complete his latest read as his love of reading was a lifelong joy.

Godspeed to our Bill who was a fine example to all who knew him and what it meant to love life and to live it well and to the fullest.